Get To The Root Of It

Yesterday, you may remember, I took up my compost bin because there were some day lily plants growing in it. After I dug everything up and replaced the bin, I was left with several dozen day lily tubers that I didn't know what to do with. 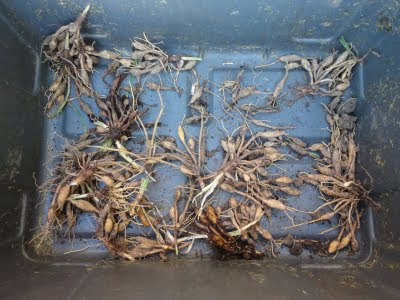 There's already clumps of these flowers in three other places in the yard, so I couldn't think of a place to plant them. I didn't want to toss them in the compost pile, in case they sprouted again. Another idea was to put them in the yard waste trash can, but when I started thinking creatively I came up with a better plan. Back in the Summer of 2008 I picked and ate a day lily flower, and I remember reading that other parts of the plant were also edible. I decided to try using the day lily tubers as part of a meal. From a Google search, I learned that day lily tubers can be cooked and used as a potato substitute, so I thought I'd make a pot of tuber soup for dinner.

The first step of the process was to clean the tubers. It was a lot of work, and not something I'd do on a regular basis, but as an experiment it was worth it. I separated each one, cutting off the thick rhizomes and hair-like roots.It took six changes of water before the tubers were clean. They do look like small potatoes, don't they? 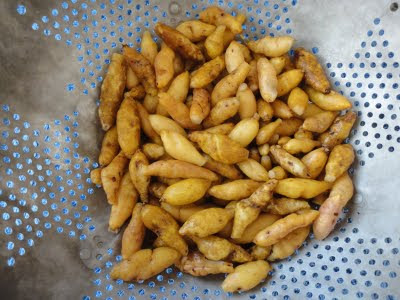 According to the Centers for Disease Control and Prevention a medium potato that weighs 173g (a little over 6 ounces) is a serving. I had 10 ounces of tubers, not enough for the amount of soup I wanted to make, so I supplemented them with a three small regular potatoes so we'd have enough food for dinner and lunch leftovers.

To make the soup I melted a couple of tablespoons of butter in a pot with a splash of olive oil and sauteed chopped onion, celery, and carrots for five minutes, then added two diced cloves of garlic and cooked it for five minutes more. There wasn't any chicken broth in the house, but I poured a can of Bud Light in the pot along with a couple of cups of water and two chicken bouillon cubes. I cubed the potatoes (leaving the skin on), but wasn't sure how tough the tubers would be, so I chopped them coarsely in the food processor and added both to the pot. After things came to a boil, I reduced the heat and simmered everything for 20 minutes until the potatoes and tubers were soft. I adjusted the seasoning, then tossed in half a bag of frozen corn to add more color. 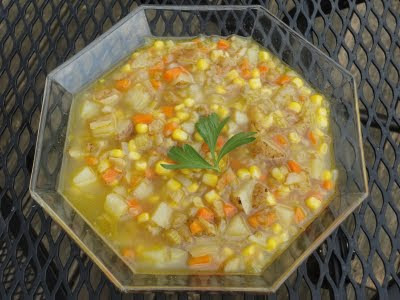 This soup was darn good! The tubers had mostly disintegrated, giving the broth a nice hearty texture but the potatoes were still chunky. The onions, celery, and garlic provided nice background notes, and the carrots and corn added sweetness. All it needed was a couple dashes of Louisiana-style hot sauce to spice it up a bit. To accompany it, I nuked some frozen cornbread left over from last week, which paired perfectly with the soup.

Halfway through dinner, I shared the secret ingredient with Tony, and he wasn't grossed out. All in all, I'd say my experiment was a success.
Posted by Kathy G at 9:02:00 AM