Back in July we had rocks installed under the deck where it was hard to grow grass. As part of the process, the landscapers had to remove the compost pile that's been next to the patio for many years, and remove some naturalized orange day lilies (also known as "ditch lilies", because they'll grow just about anywhere) that were planted around the deck posts.

I bought a much nicer black plastic compost bin with a lid and a sliding door at the bottom to remove finished compost, and put it next to the garden, right where the lilies had been. At that time the temperature was well over 100 degrees. I figured that any day lilies in the footprint of the new bin wouldn't survive. I was wrong.

Last week I went out to dump some coffee grounds, and I saw this: 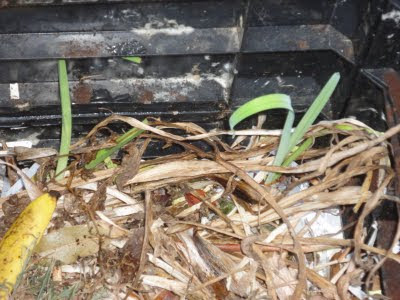 The lilies had lived through being encased in black plastic during the middle of the hottest summer in decades! As much as I admired their tenacity, I had to get rid of them. This morning was "Project Lily Removal" day.

First thing I had to do was move the bin. It was easy, since I hadn't used the plastic stakes that came in the package to secure it down. (The ground was so dry at the time they wouldn't have gone in, so I took a chance we wouldn't have a big wind that would blow the bin away.) Since the bin was just set in the dirt, it was easy to tip it over on its side and carry it out to the yard. I had hoped to be able to use some of the contents, but it wasn't ready yet. With a garden fork, I transferred everything to the wheelbarrow. 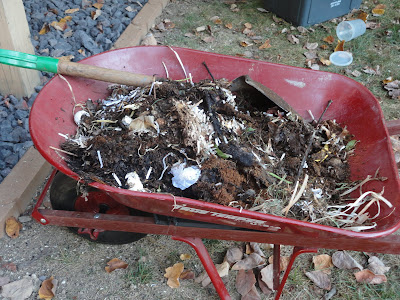 With the area clear, I was able to see the shoots clearly. I used a garden fork to lift up the dirt and removed the day lily tubers. I was surprised to find that in addition to the two I knew about, there were several more that would have eventually sprouted, so I dug up the entire area and removed the tubers as well as a gallon-sized flowerpot of rocks. I loosened the soil about a foot deep, then broke up the big clumps of clay so the bin would be flush against the ground.

The compost bin had come in a box with pieces that interlocked to make the final result. The stakes fit into holes in the corners after a base had been assembled. Today I took the bottom layer off, then checked it for straightness with a level before I pounded one stake into each corner with a rubber mallet 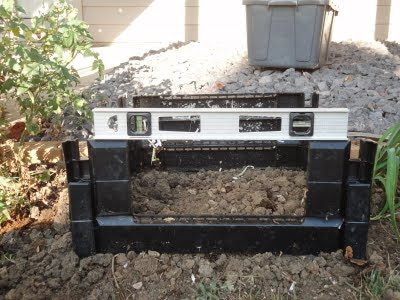 Once the bottom layer had been secured, I set the rest on top so the pieces locked together. I put the contents of the bin back in, then added the lid. Here's the finished bin, ready for more yard and kitchen waste: 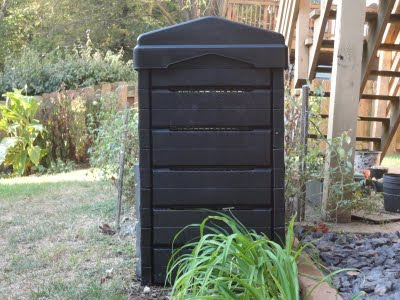 When the job was done I put everything away, and tried to figure out what to do with the day lily tubers that I'd thrown in a bin. You'll never guess what I came up with...
Posted by Kathy G at 12:36:00 PM