There are two types of periodical cicadas (13-year and 17-year, which refers to the length of their life cycle); both are cousins to the Dog Day cicadas that show up every year in late summer.  Our area is experiencing the appearance of a brood of millions of 13-year cicadas, which will be flying around in search of mates for the next month or so.

Yesterday I was outside pulling weeds when I noticed that a patch of spiderwort underneath the maple tree looked a little odd: 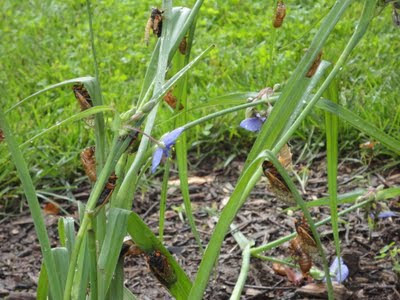 There were more than a dozen cicadas, or cicada exoskeletons, hanging on the plant's leaves!

The insects have an interesting life cycle. They spend the vast majority of their life underground. At the appointed time they emerge en masse, molt, and go off in search of a mate. The males attract females by produce their charismatic sound, which comes from contracting membranes called tymbals on either side of their abdomen. After mating, females lay hundreds of eggs in small gashes they tear in branches of trees and shrubs. The eggs hatch in midsummer, and the nymphs fall to the ground and burrow into the soil to start the process over again.

After I realized the cicadas were there,  I looked more closely, and saw them scattered on the mulch around the spiderwort and the grass under the tree. I also caught this cicada in the act of molting: 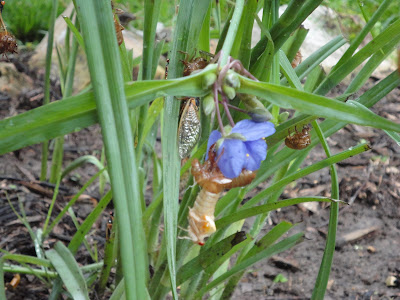 One cicada by itself doesn't make a whole lot of sound, but when you put a bunch of them together they can be deafening! Our neighborhood's relatively young, so last time the cicadas came around there weren't too many trees for them to use (and therefore not as large of a mass of mature insects this time), but yesterday I drove through an older subdivision and even with my car windows rolled up the sound was annoying.

In the South, cicadas emerge only once every 13 years. In the North, they stay underground for 17 years. Some places (like our area) are lucky enough to have both types. In 1998, the 13- and 17-year cicada's cycle coincided, which led to a huge mess. That year the boys' elementary school had their end of the year picnic at a city park. There were so many bugs flying through the sky some of the kids were shrieking in terror.