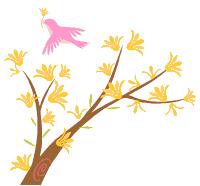 A while back a friend suggested I might enjoy pursuing an alternate career path, but I balked, because I had a job that kept me busy.  How quickly things can change!

Yesterday as I was leaving work, the preschool director asked if we could talk for a couple of minutes.  She started the conversation by saying "I have some bad news".  The word on the street was that preschool enrollment for next year was down, so I braced myself, figuring that she was going to tell me I wouldn't have a job after the end of this year.  However, when she told me that they didn't need me any more as of today, I was shocked!  I wasn't the only one getting a pink slip.  Every classroom that had two assistants was losing one, and several non-classroom positions were being eliminated.  Even the after-hours cleaning lady was going!

I managed to hold it together during our brief conversation, but the rest of the day I alternated between being angry, sad, and even a bit excited.  I'm fortunate that we don't have to rely on my earnings for everyday living expenses, so I can take my time and figure out what type of job I want.  Just like the mother bird who practices tough love so her babies will learn how to fly,  this might be a much-needed positive kick in the pants.

The last time I was laid off from a job was 30 ago, when I was in college. The place I worked was bought by a new company, whose first order of business was replacing the entire staff.  However, that dismissal set off a chain of events that led to meeting Hubby Tony.  I know something good will happen this time too.  I just have to wait and find out what it is.
Posted by Kathy G at 9:29:00 PM