Now that June is here it really feels like summer. The hot, humid weather is making my tomatoes and peppers grow quickly.  One of the pepper plants already has a fingernail-sized fruit!

I usually meander by the "garden" (a 4-foot wide strip adjacent to the patio and deck stairs) a couple of times a day, because it's also next to the compost pile. Several days ago I saw something poking up from the newspaper-and-grass-clipping mulch that hadn't been there before.  I leaned down to take a look at it.  It was small; a set of "baby" leaves and a first set of true leaves that were miniature versions of the ones on the tomato plants farther down.  It was a volunteer plant! I guess a tomato fell on the ground last year and the seeds survived the winter then sprouted when the soil heated up.

I didn't have time to do anything about it then, so I left the plant undisturbed.  The next day another set of leaves had appeared. The tenacity of the rogue seedling was endearing, and I decided to keep it.  However, it needed to be moved to a different part of the garden.

I dug up the small plant, which didn't have many roots, and whisked it to the other side of the bed. I made a deep hole and planted it so the stem was buried all the way up to the first leaves. (Did you know that tomatoes will root along the entire stem?  By burying it deep it sprouts more roots which helps it grow.) I gave the young plant a good watering and walked away. It would grow or not. Later in the day when I checked on it, it was laying limply on the ground. The next morning half of the plant was limp and the other half was standing up. Today it looks like this: 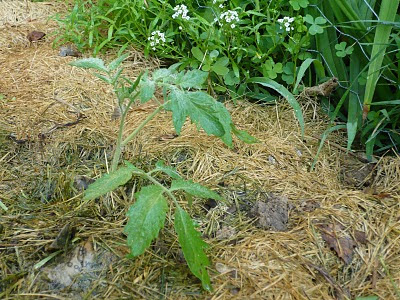 (See the white alyssum the background?  That's a volunteer plant too. Years ago I planted some in the front yard.  At the end of the season I threw the spent plants in the compost pile; the seeds survived the winter and grew wherever I used the compost the next spring.  Now I just let the flowers do their thing and they come back each year on their own.)

I grew a variety of tomatoes last year, so there's no way to know what kind I'll get from this plant.  From the looks of things, though, it is NOT a bush variety. At the rate it's growing I'll need to stake it soon.
Posted by Kathy G at 7:45:00 PM