(It's) For The Birds

The critters are at it again.

Last spring I used hot pepper in the bird feeder to keep squirrels out of it.  It worked quite well, but this year they're back again, and they've brought their friends the chipmunks.  The uninvited guests are real bullies.  They take over the feeder so the birds can't get to it; if the birds are there first they scatter when the animals show up.

Last month I went through an entire 40 pound bag of birdseed.  I fill up the feeder in the morning, and by mid-afternoon it's empty.  Part of the problem is my fault.  It's easy for the agile animals to reach the feeder, which hangs from the deck rail by a shepherd's hook. I don't want to move it, though, so I've declared war on the rodents.

Red pepper is effective because mammals have taste buds (birds don't), so they can experience the effects of capsaicin, the ingredient that makes chili peppers hot.  I followed the same procedure I used last year and mixed a batch of seed with cayenne pepper and hot sauce, which makes the pepper stick to the seed.  The finished concoction had a reddish tint, and it smelled hot.  I poured the seed into the feeder and hung it on the deck.

Several hours later I looked out the kitchen window and saw this: 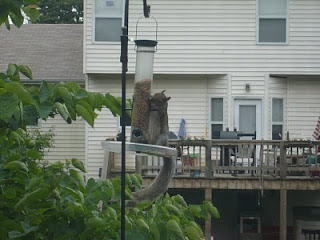 The squirrel was sitting on its haunches merrily snacking from the feeder.  Just my luck... a foodie squirrel!  After a couple of minutes I decided to move him along by going out on the deck.  He jumped off the feeder, but sat on the deck rail and looked at me, only scurrying away when I got close.  Later on in the day I saw a bushy-tailed critter indulging in my culinary masterpiece again.

However, today the feeder food level is going down more slowly.  Maybe all the varmints had a taste of my culinary masterpiece and decided to go somewhere else to get their food.  I can only hope.
Posted by Kathy G at 8:00:00 PM