The Intersection of Art and Nature 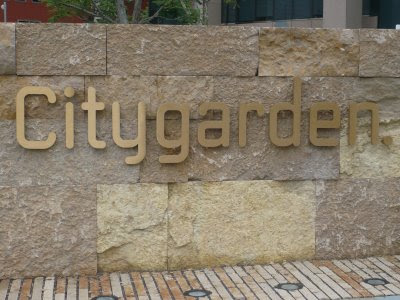 There are a lot of places to see sculpture in St. Louis, but today Tony and I visited the newest one, Citygarden. Citygarden is a three acre public sculpture and landscape garden that's part of the Gateway Mall downtown, bounded by Eighth, Market, Tenth, and Chestnut Streets.

Citygarden opened less than a week ago and has had a lot of press, but I wasn't really sure what to expect when we got there. I was very impressed. The park is laid out in three “bands” that represent the geographic features of our region: the Northern River Bluffs Band which symbolizes the high ground along the river bluffs, the Middle Floodplain Band that suggests the bends of the Mississippi and Missouri Rivers, and the Southern River Terrace Band that calls to mind the cultivated river terraces. You move seamlessly from one area to another by way of steps, ramps, or paths. 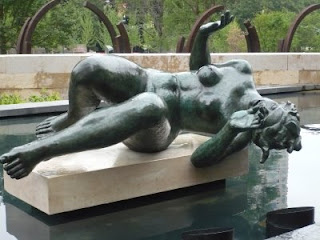 There are two dozen pieces of sculpture in a variety of sizes, mediums, and styles. The art is sited well; a few of the sculptures are hidden around a turn in a path, and some are so big there's no way they could be hidden! The plaques identifying each piece's title and artist name are set in concrete at the base of the piece and are sometimes hard to find, but I think that may be because some of the sculptures have no dominant "back" or "front" side.

The park also has a 16-foot-long video wall that was showing a rotating collection of art videos today; however, the Citygarden Website indicates the wall will also show baseball games, movies, and commercial films. There are three water features--two fountains and a splash plaza-- scattered about the area that already seem to be popular with children and the young-at-heart who don't mind getting wet.

Both of the buildings in Citygarden have green roof systems, which will provide a nice view for the people in the office buildings around the park. One of the buildings, a cafe, is open six days a week (but unfortunately not on Sunday). It has floor-to-ceiling windows and looks like it would provide a great view of the park. The other building, a maintenance structure, is only visible from the street, because it's attached to the back of a large stone-block wall that is one of the park's design elements. 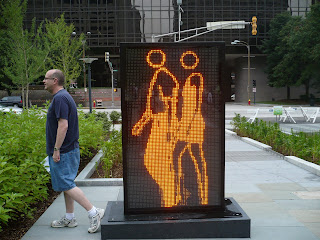 Although the sculpture is what brought us downtown, I was also impressed with the Citygarden landscaping. Most of the trees, plants, grasses, and groundcovers are native to Missouri, and it looks like the gardens were designed with all four seasons in mind. The plants were labeled, but some of the signs were a little hard to find. Although many of the plants need some time to mature and fill in, a few of the focal point trees were already quite large. Another interesting feature is the six rain gardens that will filter storm water from a majority of the park's surfaces.

There were informational maps available at several places in the park, but they were large and hard to maneuver in today's wind. Next time, I'll use the self-guided audio tour which can be accessed by cellphone on the spot or downloaded as an mp3 file. The tour is narrated by national and local figures, and is billed as being "funny, interesting, and surprising" without " the "artspeak" that can make art seem inaccessible".

I'm looking forward to going back and seeing Citygarden again.
Posted by Kathy G at 9:25:00 PM