Just a Tuesday In Retirement

After breakfast and the daily household straightening, Hubby Tony and  I started out our morning by going to the polls. There was only item on the ballot, no line at the polling place, and we had both figured out where we stood on the issue. We were in and out in less than ten minute.

Next, we headed east to find clues in two chapters of our scavenger hunt book. One of them was Soulard, a neighborhood just to the south of downtown. The other one was downtown itself. When we started today we had both chapters a little over halfway done. After a couple of hours of sleuthing today both are almost finished.

Halfway through our downtown adventure we stopped for lunch at a soda fountain restaurant. After our savory food (hot dog and onion onion rings for me, BLT and fries for Tony) we ordered dessert. Tony chose a root beer float. I went for a "Freak Shake", one of the most over the top items on the menu. The rim of the large glass was crusted with miniature chocolate chips and potato chips. The bottom of the glass was coated with chocolate sauce. The vanilla shake was topped with a heavy layer of whipped cream, and a chocolate-covered pretzel rod, brownie, and Reeses were stuck into the whipped cream.

I don't know if I should be proud or ashamed to report that between Tony and me we finished off all of his float and everything but the brownie on mine. 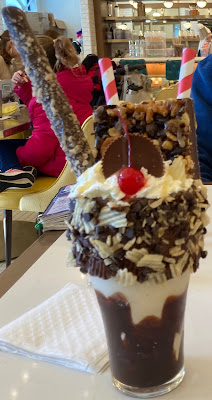