I Would Never Make It As A Food Blogger

Last night Hubby Tony and I were invited to a neighbor's driveway for a potluck. I was excited to receive the invitation a couple of weeks ago. Even though we've lived in our condo for almost two years, thanks to Covid the only people I've really met are the ones in our building.

The invitation said to bring a favorite dish or dessert, and whatever we wanted to drink. I wanted to make something easy which wouldn't need to stay warm, because I figured the food would be served outside. After spending some time poking around the internet for ideas I decided that Potato Salad Bites (small potatoes hollowed out and refilled with potato salad) would do the trick.

There were a lot of interpretations of the recipe but I used a Betty Crocker one as my inspiration. The first step is to roast potatoes. Next you cut them in half, scoop out the insides, mix that with potato salad ingredients, then stuff the mixture back into the skins. I changed up the recipe slightly by adding the recommended chopped up green onions into the mixture instead of using them as a topping.

It was already brisk at 4 pm when we walked around the corner. The hostess had a couple of fire pits in the driveway; each had a large pile of wood next to it. A row of tables was arranged down the middle of the garage, and the cabinets on the side of the garage held more dishes. I put my tray down and explained what it was.

I should have brought a little sign with the name of the dish, because when the food was served people commented on how 'cute' the bites looked, but no one knew what they were. I explained again. Someone ate a one and commented on how good it was. Later, when I went back for dessert I overheard one woman telling another "I don't know why made them, but you have to try these little potatoes". I identified myself as the maker, and briefly explained the recipe.

Tony and I had to leave early because we had a second commitment. Out of the 24 bites I brought there were only four left. I transferred them to another plate so I could take my platter home. It wasn't until I was walking into my place that I realized that I forgot to take a photo of my dish, a requisite of any foodie post. 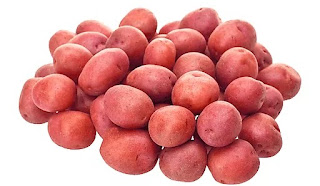