What Are The Chances?

Ever since we moved at the beginning of the year I've wanted to get a new spread for the master bedroom bed. The duvet cover it's sported for a couple of years was getting shabby looking, and some of the buttonholes that closed it up were ripping.

The easy thing to do would have been to go online and have my purchase delivered. That would be the easy way. However, whenever possible I prefer to shop at thrift stores, which have an ever-changing selection of merchandise where finding something just right is a challenge. Then on top of that this spring stores were closed for almost two months. Even after they opened it took some time for me to decide to go in. Once I dipped in my shopping toe, though, in the rest of my body soon followed. Now if I'm driving by a store, and have time to visit, my car just naturally pulls into the lot.

For weeks there were no queen-sized duvet covers to be had, so I expanded my search to include comforters and bedspreads and still came up with nothing. I continued to search, and one day last week I found this quilt (which looks homemade, but bears a department store tag).


I liked it, but since Hubby Tony also uses the room it he had to approve it also. Thankfully he did.

The next step was to upgrade the bed skirt that hides all the things I shove under the bed. I wanted something other than white, ideally with split corners to accommodate the vintage bed frame so it doesn't wad up like the current one.

The split corner style is difficult to find, so my plan was to find a sheet or some material that was the right color and sew my own. Today I left the house carrying one of the quilt shams with me for color matching. The first store I stopped at had nothing. At the second store, way down at the end of the rack I struck gold. Not just a sheet or material, but an actual queen-sized bed skirt! The color wasn't exactly right-I was looking for khaki, and it was more mossy, but for four dollars I decided to take a chance.

In addition to the color, I discovered there's another issue. Without the quilt overlay the split corners show part of the frame, probably as a result of converting the original double bed into a queen. I might keep my eye out for something even better. Or not. 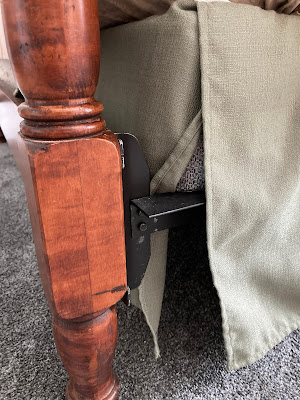