Today is the anniversary of my birth. As it turns out, it's also the day of the largest snow storm our area has seen for years.

The weather people have been salivating about the upcoming storm for days. There were predictions of anywhere from seven inches to a foot of white stuff. As happens around here, the snow was all anyone could talk about. When was it going to start? How much would we get? Yesterday the cancellations started-schools closing early, and after school events called off. The forecasters get things wrong as much as they get them right, so I was skeptical. However, I'm also a realist, so I figured that my plans to go out for dinner and dancing would probably have to be changed.

This morning the sun never came out from behind the clouds, and when I left the house for my morning activities the air felt heavy and humid. Hubby Tony was home today, so he and Son Donald took me out for a celebratory lunch. On the drive home the first flakes started coming down. When we pulled into the garage twenty minutes later the snow was steady, and a light film covered the driveway. I was ready to hunker down in the house, but Donald gathered some clothes and headed out to a friend's house. (He texted me when he arrived, saying the driving had been some of the most stressful he had done in a while.)

I decided to take advantage of the enforced time inside to nap, fiddle on the computer, and basically do nothing. Many of my Facebook friends sent me birthday wishes. This was my favorite: 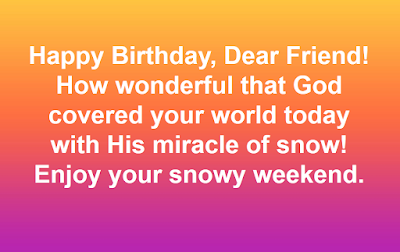 After dinner Tony and I went outside to do a first shoveling of the white stuff. At 7 pm there were 5 1/2” on the ground. By the time we went to bed the driveway was covered with another thick layer. 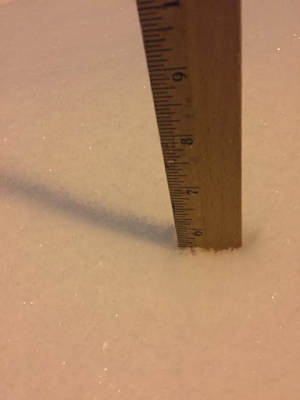 Tonight the news was filled with stories of horrible traffic jams, and how it was taking people hours to drive distances that usually took far less than that. The meteorologist predicted this storm could be record-setting. I ended my day thankful that I was home safe and warm.