Today the company I was doing work for asked me to audio record part of it. To do the recording I turned to the Voice Memo app on my iPhone, which has always served me well for things like this. One portion of the job involved driving in an enclosed, unheated golf cart from one building to another, and then backtracking to the start ten minutes later. Including walking time, each leg took about two minutes in a brisk (25°Fahrenheit) temperature. 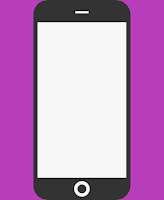 At the end of the job I thanked my contact person and returned to my car. I tried to wake up my phone, but instead of my normal lock screen this time the screen was blank white and it didn't respond when I touched it. In addition, none of the buttons worked. I was concerned that my phone might have died, but several minutes later things returned to normal and I was able to open the phone up. Not everything was hunky dory, though. When I looked at my voice memo recording,  I found that only a third of it was there.

I came home and sent an email to the company, then turned to Google to research what might have caused the problem. Much to my surprise, I found out that Apple suggests 32° Fahrenheit as the lowest operating ambient temperature.

My phone didn't work because of the cold weather. It's more of a weather weakling than I am!
Posted by Kathy G at 9:31:00 PM