From One Grandma To Another

Back in June Son Brian and Grandson Jay had to come for an emergency visit. Because he would be traveling without DIL Nicole, Brian didn't want to have to carry a big car seat through the airport. Instead, he bought one online and had it delivered to the house.

At two years old, Jay is young enough that he still has to use a rear-facing car seat placed in the center rear seat of the auto. The one Brian bought would not fit into Hubby Tony's car, and it was hard to install in mine. However, we got it in and used it for several short trips over the two days they were in town. 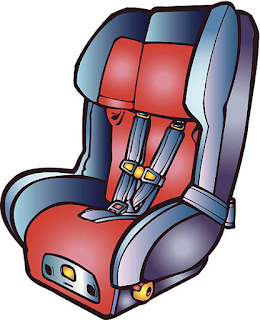 Brian left the seat here, and in December just before Jay and family flew in Tony put it into my car again.  We had to guess how much Jay had grown and adjust the straps accordingly. As it turns out we guessed wrong, and his parents had to re-adjust them in the airport passenger pick up area (which was very stressful for everyone).  During the week the family was here the seat got a lot of use, but I heard from his parents that Jay was never really comfortable in it.  At the end of the trip Brian announced that they would get a different seat the next time they came into town.

I wasn't sure what to do with the barely-used seat, so I put it in the spare bedroom, and after a couple of weeks I started looking past it. However, last week I stepped into the bedroom, re-saw it, and decided it was time for it to go. After researching the seat's expiration date to make sure it was safe to give away, I posted its availability to my Facebook friends. Six people inquired about it. Interestingly enough, four of them were grandmas, and the other two were young people who said their moms might be interested.

I contacted the first woman who messaged me and told her the seat was hers.  She picked it up last night. The woman has an in-town grandson that was born in mid-November, and I know it will get a lot of use at her house.