The day after our jaunt to Sacramento was the Fourth of July.  Daughter-in-law Nicole had a previously scheduled bike ride, and was already gone when the rest of us woke up. Son Brian had done some research and suggested that the San Jose Rose, White & Blue Parade would be a good morning activity for the rest of us. After breakfast he packed a bag with snacks and drinks for Grandson Jay and made sure the stroller was in the car before we left.

The parade started at 10:00. For almost two hours we saw floats, Scout groups, bands, antique car clubs, dance groups, service organizations, and groups of pets go by. There was a festival area at the end of the route, but  Jay was getting tired, so we walked back to the car and drove to a Panera close to the house, where we met Nicole for lunch. Then it was back to the house for nap time. 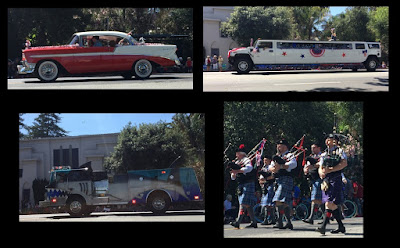 Brian and Nicole had invited some friends over for dinner. They arrived about four o'clock, each bringing a dish to share. Brian and Nicole provided ribs, baked beans, cole slaw, and chips. Tony and I threw in a bag of Belly Flop jelly beans. After dinner we sat outside. As it got dark Brian offered Tony and I the chance to go watch fireworks. We declined. However, their house was close enough to the city's display that I heard the boom of the show for an hour after I went to bed.


On Thursday, the last day before Tony and I few back home, Brian and Nicole took the day off and we made a trip to the Monterey Bay Aquarium.  Brian and Nicole are members, and their extra guest passes got me and Tony in for free. We spent a couple hours there, concentrating on Jay's favorite displays-the habitat exhibits with lots of fish, the penguins, and the children's area.

Before we left the aquarium we ate lunch in the cafe (where I thought the food was surprisingly good for a cultural institution).  After lunch we walked a couple of blocks for ice cream, then got back in the car and headed home. It took Jay about five minutes to fall asleep, and he napped for the entire  drive.

Brian had after-dinner plans, so Nicole, Tony, and I took James to the park, where he had a great time climbing, sliding, and digging in the sand.  At bedtime we gave Jay extra hugs and kisses, because we didn't know if he would be awake the next morning when Brian drove us to the airport.