When I picked up some donated flowers from a funeral home a couple of weeks ago one of the arrangements was a large vase containing a colorful mix of flowers, greenery, and curly willow branches. I broke down the arrangement, put all the stems in water, and took them with me the next day. At the end of the weekend I offered the flowers to the people who had attended the retreat. As I was carrying around the container I noticed that the branches were now studded with tiny green leaves!

I brought the remainder of the vegetation home. At this point the donated flowers were close to a week old and looked pretty rough. They went into the green waste can. The flowers I had bought for the occasion were still fresh. I put them in a vase along with the branches and some leatherleaf  fern stems. The only place that's safe from the cats is the family room fireplace mantel so I placed the arrangement there.

As the stems of flowers faded I took them out of the vase. Eventually I was left with nothing but greenery and branches.  The leaves on the branches kept getting bigger, though, so I wondered if they would grow if I planted them.  Google told me that yes, they would but that willows are vigorous growers with soft wood and invasive root systems.  I decided to put the stems into a pot.

The only appropriate size container I could find in the garage was an unattractive looking nursery pot, but I filled it with good potting soil and stuck the stems in. If they thrive I can slide the nursery pot into a decorative one. It's still cold at night, so for now the whole thing is back on the fireplace mantel. 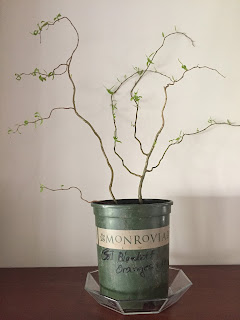