Remember the story of our broken air vent?  I was pretty flustered when a bird flew out when I climbed up on a ladder to take a close look at it.

The next day I went to the hardware store and bought the replacement cover suggested by the store clerk.  Sadly, the cover had a slightly different design and wouldn't fit.  The next day I went to more hardware stores and got four additional covers, thinking that surely one of them would work.  Nope.  None of them would lay flush against the siding.

Neither Hubby Tony or I had time that week to wrestle with the project any more, so I asked my Facebook friends for handyman recommendations. I got two, but I also got an offer from someone to come fix the issue in exchange for a batch of homemade cookies.  He recommended that until he could get here we stuff the vent with towels to prevent another critter from getting in.  I went to bed that night with the vent secured.  The next day it looked like this: 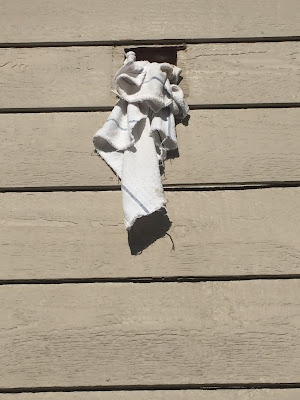 Something really wanted to be in there! This time before I climbed up the ladder I waved a broom in front of the hole.  A small wren flew out and over to the nearby redbud tree, watched while I stuffed the towels back into the hole, then flew away.  Twenty minutes later she was back with her posse.  The group of birds perched in the tree, scolded me for five minutes, then left.  After that I checked the vent several times a day, but the towels were never disturbed again.

Several days later the friend showed up and determined that if he filed off a small section of siding one of the covers would fit.  Twenty minutes after he arrived he was done, leaving me to caulk, clean up, and return the covers that we didn't use.  (And he took a rain check on the cookies.) 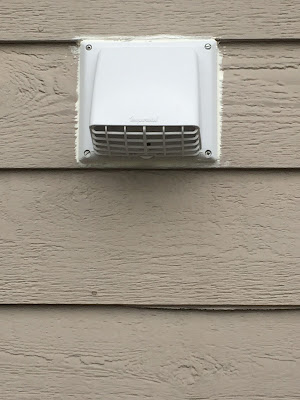