Last Monday Hubby Tony left for a training class in Kansas City. His class finished up Thursday night, but instead of driving immediately home he spent the night there and I helped him turn Friday and Saturday into a mini-adventure.

The fastest route between Kansas City and St. Louis is Interstate 70, but we decided it would be interesting to explore off the Interstate.  About the time he was heading east out of Kansas City on US Route 50 Friday morning I was boarding an Amtrak train to go west. Our mutual destination was Jefferson City, the capital of Missouri in the middle of the state. 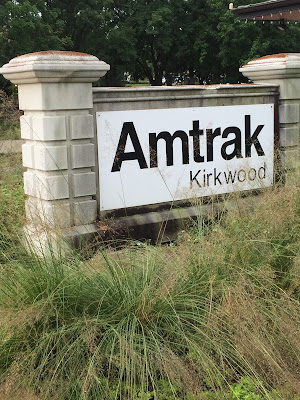 Tony was waiting for me at the Jefferson City station when I got off the train. After a nice lunch at a downtown restaurant we walked around for a little bit, then headed to the Capitol building.  They're doing some major renovation on the main entrance and it was hard to figure out where to go in, but we made it on time for the 2 PM tour.  Our guide gave us some of the history of the building, pointed out the busts of famous Missourians, and took us into the House of Representatives viewing gallery, but the part I liked the best was when we got to go into the House Lounge and see the walls filled with Thomas Hart Benton murals.

When we left the capitol a light mist coming down, so we headed to the car, drove to our hotel, and checked in.  After a short nap I was ready for the evening.  We started with dinner, then drove back to the Capitol area, where a stage had been set up for a free outdoor concert.  We talked to a friendly man, who gave us some ideas of activities for the next day.

Saturday morning after a hotel breakfast we drove to a Department of Conservation facility and walked the trails.  We came back to the hotel long enough to gather our things and check out, then headed east towards home. Even though it was still mid-morning, before we left Jefferson City we made a stop for ice cream at Central Dairy, an institution that goes back to the 1920s.

Highway 50 from Jefferson City to the western part of the St. Louis metropolitan area is approximately 140 miles, which would take approximately 4 hours to drive straight through. However, you don't take a U.S. Route road to drive straight through!  Our eight-hour meandering drive, which also had us going down several state highways, took us through some interesting named cities:


a famous sausage company, where they were holding a festival in conjunction with the church next door: 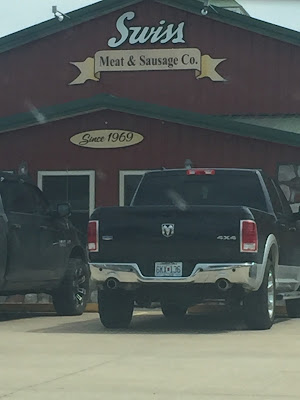 a Catholic shrine that dates back to the mid-1880: 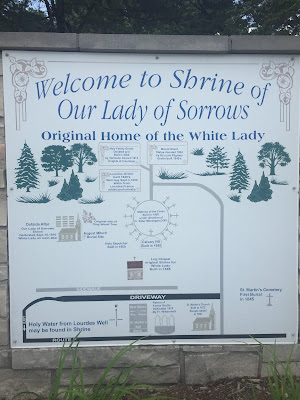 a church in Washington, MO along the Missouri River:

and a restaurant in a historic building on what used to be Route 66: