Sunday morning at 12:01 AM Hubby Tony and I were lined up (along with thousands of other bike riders) who were participating in the Moonlight Ramble, a leisurely nighttime bike ride through the streets of St. Louis. 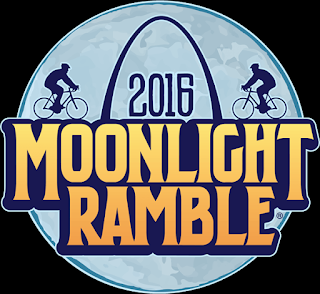 This is the third year we done the ride, which takes off next to Busch Stadium.  This year they changed the pre- and post-race race staging area to Ballpark Village, which is directly north of the stadium.  We arrived early enough to walk through the vendor booths and get some swag, then about 20 minutes before the race kickoff we retrieved our bikes and headed towards the starting gate, where there were already several hundred people ahead of us.  Some people in the front of the line had beach balls they were batting back and forth.  Shortly before midnight I heard a loud roar, and several minutes after that I didn't see the beach balls bouncing any more.  I knew it must be time to go.

As in past years, the race started off so slowly it was easier for me to walk my bike. Even once the pace picked up it was still slow going for a couple of blocks, but eventually the course turned onto Market Street and riders could spread out over all four traffic lanes. Several miles later the route changed back onto narrower residential streets and it was hard to navigate again. I was glad when we returned to a major street.

There's always a short (approximately 10 miles) and a long (approximately 18 miles) route.   In previous years we've always said we were going to go the entire way, but when confronted with the turn off for the short route we wimped out.  I'm proud to say that this year we did the entire thing.
Posted by Kathy G at 10:12:00 AM