It the past two days I've gone through more bandages since the last time there was a toddler in the house. 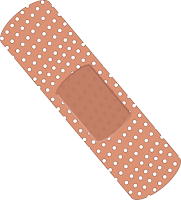 Yesterday I was using a vegetable peeler on a butternut squash. The job was almost done when the peeler slipped and took off the right side of my thumb nail, then continued down the finger leaving a half-inch long nick. Grumbling at my stupidness, I grabbed a rag and wrapped it around the finger until the bleeding stopped, then put a Band-Aid on.

The problem was that I was doing a lot of cooking and cleaning and didn't have any rubber gloves. Over the course of the afternoon and evening I had to change the bandage four times when it got wet or I bumped the cut and it opened again. Fortunately, this morning things looked pretty good so I switched over to a layer of clear nail polish (which I use as a substitute for liquid bandage).

This afternoon I had to stop for gas. As I pulled the trigger on the pump handle somehow my thumb got caught in the hinge. The result was a puncture about a quarter of an inch long, which immediately started bleeding profusely. I grabbed a paper towel to apply pressure with my index finger and finished up the pumping.

It was a very minor cut, but I figured that a pump handle would be pretty germy, and just in case something didn't heal right I wanted the station to know what had happened. I walked inside, explained the situation, and asked if they had a Band-Aid. The associate went to the back of the counter area and came back with a large box. I selected one, thanked him, and wrapped it around my thumb when I got back in the car.

The cut was still bleeding a little bit and soon I could see a red splotch on the gauze pad from the outside of the bandage. I continued to apply pressure by pressing my thumb against the steering wheel. When I got home I washed my finger, doused the area with hydrogen peroxide, then spread on a layer of triple antibiotic ointment before applying a new bandage. It was only an hour later, while I was working on dinner, that the bandage got wet and fell off.  This time I didn't bother getting a new one until I sat down to eat.

Do you think I should be extra careful tomorrow?
Posted by Kathy G at 8:19:00 PM