Last time I was at the Middle Eastern market near my house I found this "Vegi Soup Mix" in the bean aisle: 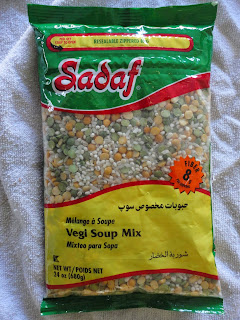 I'm always on the lookout for new and simple dinner ideas, so I took a look at the package ingredients....yellow split peas, green split peas, pearled barley, and long grain rice.   On top of being healthy, the package didn't cost much, so I threw it into my basket.  I'll try anything once.

The next gloomy day I decided to cook the mix for a hearty dinner.  There was a recipe on the back of the package which called for adding water, bouillon cubes, chopped onion, salt, and pepper to the soup mix. Knowing that bouillon cubes would make the soup too salty for my taste, I decided to use stock instead.  Unfortunately, when I looked in the freezer I discovered there was only one jar.  I had to add additional water to have enough liquid.  I also threw in chopped garlic, a couple of stalks of celery that needed to be used, and a large handful of dry parsley.

The soup simmered on the stove for about an hour.  As it cooked a wonderful aroma spread through the kitchen.  I was a little disappointed with the monochromatic look of the finished product, but a garnish of chopped tomatoes gave it some color. 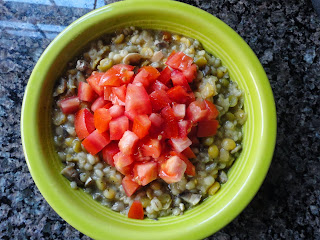 This vegi soup was very tasty.  The barley's chewy pasta-like consistency was a nice contrast to the softer split peas, and the rice and barley starch gave the soup a creamy texture.  The bag made enough for two night's dinners, with more poured into plastic containers and put into the freezer for meals down the line.