As they usually do on Sundays, yesterday Hubby Tony and Son Donald cooked dinner.  This week's meal was a casual frankfurter bar with all the fixings (ketchup, several types of mustard, sweet pickle relish, dill pickle spears, saurkraut, chopped onions, and shredded cheese).  To add to the choices they also made chili, and set out two ladles-a large one to dish out a bowl and a small one to put some on the sandwich. 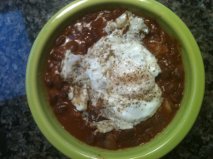 At the end of the meal the franks were gone, but there was enough chili for leftovers.  I knew Tony had dinner plans for tonight, so I figured leftover chili would make a good evening meal.  I put mine in a bowl, then dumped the last of the chopped onions and cheddar cheese on top.  However, when I came down to the kitchen this morning the chili was calling my name, and I decided it would make an equally good breakfast. While the chili was heating in the microwave I fried an egg over medium, then set it on top of the chili.  The dish looked good, and tasted even better.  I finished the meal with a sliced kiwi and coffee.

Later in the day, I was relating my meal to someone, and described it as "halfway to a slinger".  I thought everyone knew what a slinger was, but from the blank look on their face I knew they had no idea what I was talking about. I did some Wikipedia research, and learned:


The Slinger is a Midwestern diner specialty typically consisting of two eggs, hash browns, and a hamburger patty (or any other meat) all covered in chili (with or without beans) and generously topped with cheese (cheddar or American) and onions. The eggs can be any style. The Slinger is considered to be a St. Louis late-night culinary original.

I've had my share of late-night slingers, but in my opinion the dish is good at any time of day...whether you use all the ingredients or just what you have in the house.