This year I decided to try growing tomato plants from seed.

The process started last year, when I saved some of the seeds from an heirloom purple tomato a neighbor gave us.  I found out that seed saving is a long, drawn out process.  First you squeeze the seeds into a container and cover them with water, then let them sit for a couple of days until they ferment and the top of the water gets moldy (which means the "goo" around the seeds has broken down). Next you rinse them and let them dry for several more days. After all that, they go in a plastic bag and get stored in a cool, dry place

I usually put tomato plants in the garden around Mother's Day. The Websites I consulted told me I should start the seeds 6-8 weeks before then, so at the beginning of April I began the process. I filled small pots with planting mix, added several seeds to each, and watered them well. Then I put the pots on a meat tray and slid everything into a plastic produce bag to keep the humidity in. The mini-greenhouse went on the east-facing window seat in the kitchen, where I overwinter my plants.

The pampered seeds germinated right on schedule, but haven't exactly thrived. I water them when they get dry, and turn the pots so all the seedlings have equal access to the sun. Four weeks later, they're barely getting their first set of real leaves. At this rate, it will be July before they're ready to go outside.

Today I was putting some scraps into the compost pile, and looked over at the garden area. There are some impressive-sized weeds that I need to pull and a layer of small rocks that have worked their way to the surface. And two volunteer tomatoes: 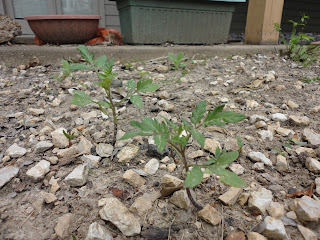 Despite the lack of attention, they seem to be doing just fine. Maybe I'll bring the coddled ones outside and let them get some advice from their wild brethren.
Posted by Kathy G at 3:32:00 PM