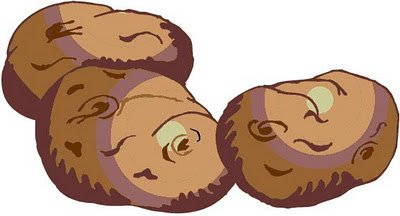 When I was doing the grocery shopping the other day, one of the things on my list was potatoes. I was in a hurry, and grabbed a 10-pound bag of russets without taking a good look at the package. Later, when I was putting the food away, I noticed I'd purchased a big of "Jumbo Sized" spuds.

They weren't kidding! The bag only had eight pieces in it. The smallest potato weighed in at one pound, and the largest was more than one and a half pounds. According to the USDA guidelines a serving of potato is 1/3 pound, or about the size of a fist. Using that as a gauge, some of the specimens in my bag would feed a family of five!

I'm only cooking for two, so at first glance these potatoes would be way too big for us. However, it shouldn't be a problem. When I cook dinner, I make four servings-enough for the evening meal and leftovers for the next day. Using the biggest potatoes, some days I'll just have a little bit extra...
Posted by Kathy G at 9:00:00 AM