Last year I planted a piece of ginger root (or more accurately, a ginger rhizome), and grew it in a pot on the deck. At the end of the season I overwintered it, and was thrilled when it sprouted again this spring. Once again, I put the pot outside when the weather got warm. Ginger, being a tropical plant, loves our area's hot humid summers. Once things start cooling off, the leaves start getting brown and straggly and ginger season is over. Instead of overwintering the plant again, this year I decided to harvest the ginger.

Here's the plant before I started: 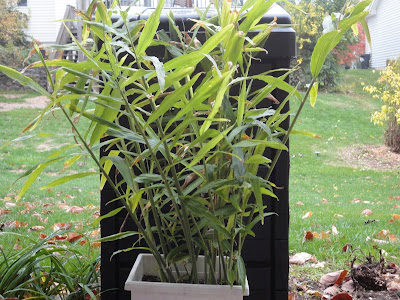 I upended the pot in the grass, then picked up the stones that had been in the bottom of the pot. The ginger's roots were a tangled mess. As I started pulling them apart, a wonderful ginger-y smell filled the air. When I was done, this is what was left: 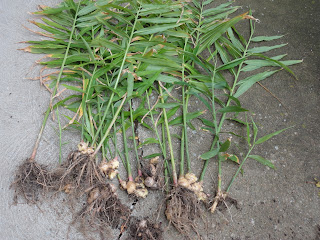 I cut off the roots and stems and threw them in the compost bin. (I bet the pile will smell good next time I open up the lid to add something to it!)

The next step was to bring my harvest inside. I cleaned it in two changes of water, scrubbing the crevices of the roots with an old toothbrush to get all the dirt off.  When I was done there was an impressive pile of ginger. I weighed it to see just how much I had--there was one and a half pounds. 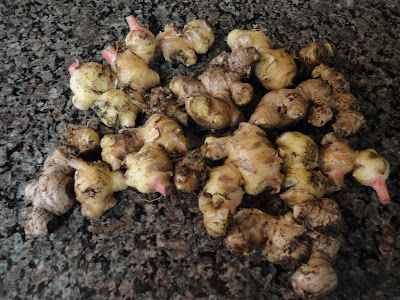 I don't remember how much I started with two years ago, but I know I spent less than a dollar on the piece I planted. (Ginger costs somewhere between $5 and $6 a pound.) I'm thrilled with my bounty. Now I just have to figure out how to use all of it.
Posted by Kathy G at 8:30:00 AM