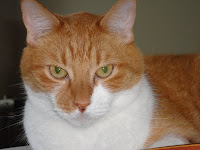 This is our cat Jackson. He's been on a diet for the last year.

Yesterday I took him and his brother Pepper to the vet for their annual exam. The vet put Jackson on the scale, and announced he'd lost one and three quarter pounds. According to the Pet Obesity Prevention Website, that's the the equivalent of 27 human pounds!

How did he do it? The same way I would-exercise and portion control.

The first thing we did is figure out how much food he should have, based on a calorie count provided by the vet. Each morning we put the day's allotment of food in a small cup with a lid, and portioned it out to Jackson at each meal. (Both cats have been fed on a regular schedule for years, so he was used to that part.)

We also made sure that Jackson got regular exercise, encouraging him to run a circuit through the living room, dining room, and kitchen a couple of times a day before he gets his meal. He started with a few laps, but now he does somewhere between 8 and 10 rounds each time. Sometimes he has to be urged into it, but once he starts he trots around with a resigned attitude. (Kind of like my attitude towards exercise!)

The vet said very few people are able to get their cats to lose weight. I have to admit It wasn't always easy. The cats can be relentless about bugging us for food, and Jackson's been known to take a bite out of freshly-made bread that's setting on the counter. (We now cool any baked goods inside the microwave.) All of our work has been worth it, though. Now when we look down at Jackson, we can see his waist. Just like with humans, extra weight on a cat can lead to all kinds of health issues; we're doing our part to make sure he lives a healthy, long life!
Posted by Kathy G at 2:10:00 PM