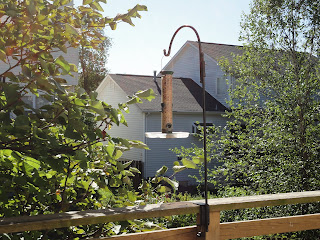 This is our bird feeder, which hangs from a shepherd's hook on the deck railing, the only place I can put it and see the birds. Because it's easy to get to, we get our fair share of squirrels, who scamper across the rail, climb the pole and sidle down onto the plastic seed tray. I've experimented with dowsing the bird seed with hot sauce and red pepper to keep them away, which works well, but this year I've gotten lazy and stopped doing it.


Last night just before dark I looked out the kitchen window and saw two raccoons on either side of the bird feeder. They were symmetrically up on their haunches with their backs to the house, front paws resting on the seed tray, dining at the all-you-can-eat bird food buffet. They looked to be about the size of our cats, so I'm guessing they were about eleven or twelve pounds, but their fluffy hair and big tails made them appear even bigger.

It was one of the most fascinating (yet irritating) things I've ever seen. I grabbed my camera and tried to get pictures from inside the house. That didn't work, because it was dark and I was shooting through a window screen, so I went into the family room and opened the door to the deck. The raccoons looked up from their meal, but didn't move. I took a couple of steps toward them, and they reluctantly stopped eating, put all four feet down onto the deck rail, and watched to see what I'd do. With their black eye masks and striped tails, they were quite cute, but I was determined to move them along. I started slowly towards them, stopping every few seconds to take a picture.

Finally they got the message and climbed into the red bud tree next to the deck. That allowed me to get close enough to the feeder to remove it from the hook and bring it into the house. Buffet closed. However, five minutes later when I looked out the window I saw them still walking along the deck rail eating the seed that was on the rail.

This morning I cleaned the feeder, refilled it, and put it back outside. However, first I mixed a healthy splash of hot sauce and a substantial amount of red pepper in with the bird seed. If the raccoons come back and eat more seed, I hope the capsaicin in the red pepper goes straight to their taste buds! And if it keeps the squirrels away, that's good, too.
Posted by Kathy G at 2:27:00 PM