Several weeks ago Hubby Tony and I 'cut the cord' and told the cable company bye-bye. We reactivated our lapsed Netflix subscription, and Tony bought an HD antenna, which lets us steam the local channels. However, because of the set up of our room the antenna did not work well positioned behind the TV. Instead, it's placed on an adjoining wall about a foot away.

The black wire draped across the space looked unsightly, and my first thought was to somehow camouflage it. However, after a lot of thought I decided to hide it in plain sight.

First I ran the wire tautly across the wall, and used a staple behind the entertainment center to keep it in place.  Next, I poked around on the internet until I found a bird silhouette, then bought a piece of heavyweight felt at the craft store. I printed out the bird shape, attached it to the felt, and cut two shapes out.  The last step was to use some adhesive putty to stick them in place so it looks like the birds are roosting. 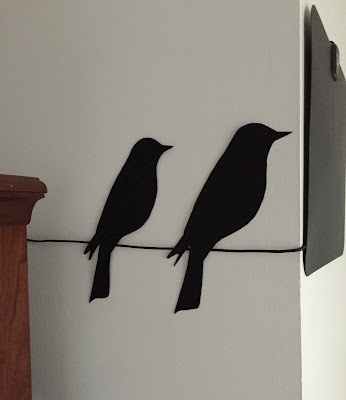