Last night I was in a meeting. My phone was on silent, but I still have it set to vibrate when a call or text comes in. Halfway through the meeting I sensed a series of three tones, one after the other.  Normally I don't check my phone when I'm otherwise occupied, but the rapid succession had me somewhat concerned. Even though I knew it was rude I pulled my phone out of my purse and held it under the table to see what was up.

All of the texts were from Son Tony to our family group.  The first one started off by saying that he and his girlfriend Ie had exciting news to share.  The next one contained this photo: 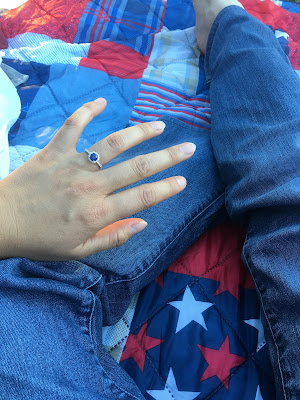 There were a couple of additional photos, and then a flurry of messages from others in the family. I lost all interest in the meeting's topics.  I wanted to share my congratulations, but decided to wait until the meeting was over. The next 45 minutes were the longest of my life.

Five years ago today: The Customer Is NOT Always Right!
Posted by Kathy G at 8:38:00 AM