The last port of call before our Alaskan cruise finished was Victoria, British Columbia.  However, since the ship didn't  arrive until 7 PM (and departed at 11:59 PM) we  had another full day at sea.  In the morning Hubby Tony and I took a galley tour through one of the kitchens.  We got to see some of the staff working on menu items for that night's dinner and some impressive fruit carvings. 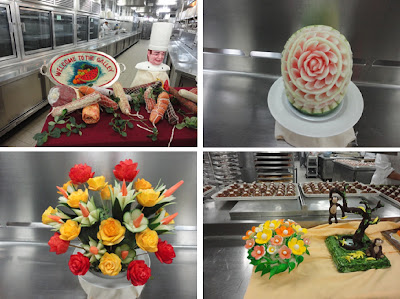 After lunch we packed our suitcases in preparation for the next day's debarkation.   Fortunately, all of the souvenirs fit easily into the bags, although we did have to expand the to their maximums.

The dining room opened early for dinner so people could eat and move on to their evening's activities.  Tony and I signed up for a bus trip to Butchart Gardens. I was really looking forward to my visit. We tried to go the gardens when we were in Vancouver in 2010, but at the last minute decided it was too far away.

When the boat docked, we left the ship and joined the stream of people heading off the dock.

There were a lot of people taking the same tour we were, and they filled several buses.  As each bus filled they left the parking lot.  Ours was the last in the caravan. The drive to the gardens was approximately an hour.  Along the way the driver told us a little bit about the history of the city. She promised that on the way back she would drive through the Chinatown area, where she would share more history.

At the garden the driver got out and picked up our tickets and garden brochures.  She handed them out as we exited the bus, and we followed the stream of people to the entrance.  Once in, we followed the suggested walking route through the beds.  Over the course of the night it got dark, but there was adequate lighting along the paths and the lights set among the plants gave the areas an exotic feel.

At the appointed time we headed back to the bus and took our seats.  Right on time the driver headed back to the dock.  However, by time we got to the Chinatown area it was dark and the stores were all closed.  That was OK, though.  I was tired and ready for my bed.

Five years ago today: Add A Little Irish To Your Game