How Dirty Is Your Mat?

Today when I did the first down dog of the day during a Piyoga class at the gym I realized that my mat was smelly.  I couldn't remember the last time I cleaned it, so I figured it was due.  After dinner tonight I turned to my friend wikiHow to figure out the best way to do that.  The article started out by telling me that I should wash my mat at least every couple of months.  Oops!  I had barely started, and already I'd failed in their eyes.  But I pressed on. 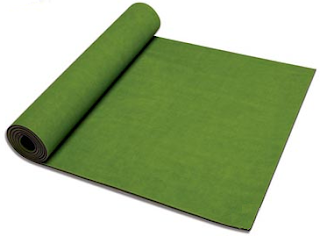 The first step was to soak the mat in a soapy water solution.  I carried the mat up to the master bathroom tub.  I haven't taken a bath lately, so before I could start I had to dust it out.  Then I turned on the faucets, squirted in some soap, and waited until there were a couple of inches of water in the tub.  I had to fold the mat in half to make it fit, so I swished it around so that all the surfaces were wet.

Ten minutes later I came back for the second step, which was to wash both sides of the mat with a wash cloth. When I was done I could not believe how dirty the water was! I took the mat out, emptied out the dirty water, and went through the process a second time to make sure the mat was really clean.

The next step was to rinse the mat until all the soap was gone.  This was the most difficult part; the mat was so long it was hard to get to all of it.  I ended up folding it in half again, rinsing each half from the top down, then folding the mat the other way to rinse the second side.

After I was sure the mat was clean I shook it to get rid of the excess water (and shook much of the water onto my shirt).  I spread a beach towel out on the floor, laid the mat on top of it, and rolled them together to remove the excess moisture.  Then I had to figure out where to put the mat until it was completely dry.  In the end I laid it on a closet shelf in one of the unused bedrooms.  I don't need the mat again until next week, so it will have plenty of time to dry.