What Would You Call It? 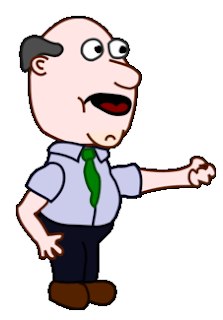 Today I was filling out a form that had several questions about a salesman I'd talked with at a store.  A couple of the questions were about his description.

I could look the man in the eye, so I knew he was about my height.  It was pretty easy to estimate his age range, but when it came to his hair and its color I was stumped.  I had a drop-down list to choose from, and the selections were pretty standard.  The choices for color were Blonde, Brown, Red, Black, and Grey.  I could pick from Short hair, Long hair, or Bald.  However, this salesman didn't neatly fit any of the choices.

The gentleman was bald on top, but there was a nice thick fringe of hair on the sides.  I could tell that he had originally been brown,  but now there was plenty of grey mixed in.

I know some men are sensitive about their hair, so I didn't think Bald was a good answer, but he certainly didn't have a full head.   And would he take offense at being called Grey?  I consulted with Son Donald, and he thought that the best answers would be Short and Brown.  That's what I went with.
Posted by Kathy G at 10:15:00 PM