Son Tony is in town this week to attend a friend's wedding.  While he was here, he wanted to do some 'tourist' things and eat a few of the local specialties he can't get at home. This afternoon all of us (me, Hubby Tony, and Sons Tony and Donald) piled into the car and drove to the Anheuser-Busch InBev brewery just south of downtown. 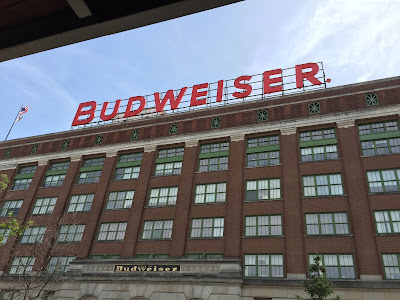 We had reservations for a "Day Fresh Tour", which stopped at the Budweiser Clydesdale stables, the beer aging cellar, the historic brew house, and the Bevo packaging facility.   Son Tony had interned on the production line there when he was in college, so he was interested to see the changes that had been made in the last decade.

The last stop of the tour was the Biergarten, where we were able to sample some of the company's products.  After that we piled back in the car for a short ride to the Soulard neighborhood, where we had picked out a restaurant where we could get toasted ravioli.

Toasted ravioli (which is really breaded and deep fried) is an appetizer that can be found on the menus of restaurants all over town. Meat or cheese is sealed in pasta dough, then breaded and deep fried until the pasta turns golden brown. It's served with a container of marinara sauce for dipping.

We ordered both meat and spinach artichoke 't-ravs', along with entrees for each person.  There were no leftovers.  Although we talked about how full we were, there was one more stop to make.  It was time for dessert!

And not just any dessert. Our destination was the Ted Drewes on Chippewa Street (which is designated as a section of historic U.S. Route 66), because Son Tony wanted a concrete.  A concrete is thick frozen custard blended with add-ins, served in a cup with a spoon. The mixture is so thick that when the cup is inverted the spoon doesn't fall out.

The lines can often be long at Ted Drewes, but we were lucky tonight.  It took longer to look at the menu and figure out what each of us wanted than it did to order.  Just a couple of minutes later we got our sweet treats and found a place in the shade to eat them.  When they were gone we agreed they'd been very good, but there'd be no more eating the rest of the night.

Five years ago today: What Type Are You?