You may have noticed that for the past Fridays I've been participating in the Random Acts Of Kindness Adventure 2015 over at My Five Men .  Betsy asked us to share simple things we did for someone else with the blogosphere.  I've had a great time showering kindness on people I didn't know.  However, I think it's also important to let the people we know the best also be on the receiving end of kind acts....just because. 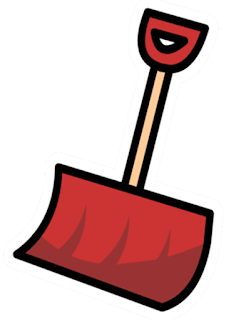 Along that line, last Saturday night Hubby Tony and I had an event to attend.  He was in charge of a portion of it, and I was going as a spectator.  The forecast called for snow, so all day we kept checking the skies.  In the middle of the afternoon the first few flurries started falling, and they picked up steam about 5 PM.

Our original plan was for Tony to leave early with another one of the event organizers, and I'd show up closer to the start time and be available to drive him home.  As he left, I asked him to text me when he arrived and let me know how the roads were.  The trip usually takes 20 minutes, but it was twice that before Tony called to let me know I shouldn't come.  He said he'd ride home with the person who brought him.

All of a sudden I had the evening free.  Even though the snow was still coming down, I decided to go out and shovel the driveway and walk leading to the front door.  We weren't supposed to get enough snow to make navigating on the driveway impossible, but I thought it would be nice for both Tony and the person who was driving to not have to deal with the mess.  I put on a pair of lined nylon pants and my warmest gloves and hat and headed outside.

There was a couple of inches of fluffy snow that was easy to push to the sides of the driveway. When I got done I couldn't feel my fingers, so I passed on doing the sidewalk.  Instead I came inside to warm up.  All my clothes were damp, so I left my boots by the garage door, hung the coat over a kitchen chair, and set my gloves and hat on top of the dryer.  I went upstairs and changed into jeans, leaving my snow pants hanging in the bathroom to dry.

Two hours later I received a text from Tony telling me he was on the way home.  When I looked out the window I noticed there was a substantial amount of white stuff on the drive again.  Once more I decided to bundle up and shovel.  There was less this time, and the job went quicker, so I shoveled the sidewalk, too.
Posted by Kathy G at 2:54:00 PM