This year we celebrated Christmas differently. Because of scheduling conflicts the extended family got together last Sunday (instead of Christmas Day) for a big dinner and our traditional Rob Your Neighbor present exchange.

Today was just our family.  There wasn't anyone awake before dawn to see what Santa brought, but the early risers were moving shortly after 7:00; eventually they coerced the others out of bed.  A couple of hours later we'd had breakfast and were seated around the tree in the living room. We opened all the presents, ooh'd and aah'd at everything, then started playing with them.  It was really nice not to have to start hustling around getting things ready for a second round of festivities.

Eventually it was time to eat again.  Since we'd already had a large Christmas dinner on Sunday, today we decided to go casual.  Yesterday Hubby Tony had picked up two half-baked pizzas from a local restaurant.  It only took five minutes to finish them in the oven.  Pizza, salad, and crudites made for a fine holiday lunch. 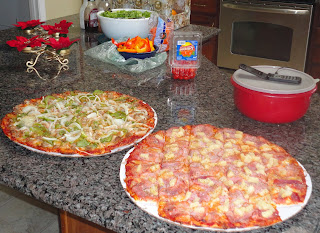