Two weeks ago my local Aldi had cabbage for 75 cents a head. That was a good deal, so I grabbed a large one. There was a lot of food in the refrigerator, and the cabbage got shoved to the back of a shelf behind a bowl.  By Sunday the refrigerator had emptied out, and I spotted the cabbage  Its outside leaves looked wilted and were sporting a couple of dark spots.  Time to figure out a way to use it!

I threw the outer layer of leaves into the compost pile, then julienned  the next layer and added them to a pot of chicken vegetable soup.  Even after that there was still a lot of cabbage left; I wrapped it tightly in plastic wrap and put it back into the refrigerator.

This morning was about cooking, mainly figuring out a way to use the cabbage.  I love stuffed cabbage, but the full-fledged rolls take hours to prepare.  I didn't have that much time, so I used the basic ingredients to make a casserole.  Less than an hour later tonight's AND tomorrow night's dinner was done.  All it needs is a quick reheat in the microwave. 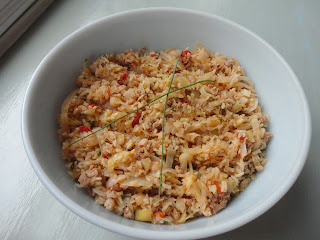