Hubby Tony and I had an almost-full house this weekend.  Son Brian and Daughter-In-Law Nicole came into town for a sporting event, and Son Donald was here, too.  (The only person missing was Son Tony.  We missed him.)

This morning after breakfast everyone went their separate ways, and we converged back at the house in time for lunch, which was carryout Chinese.  Brian went to pick it up, and came into the house carrying a large brown paper bag.  We took out the containers holding the entrees and the soups; after they were distributed there was a layer of sauce packets laying on the bottom of the bag.

For five people the clerk had given us more than 30 packets of soy and sweet and sour sauce! 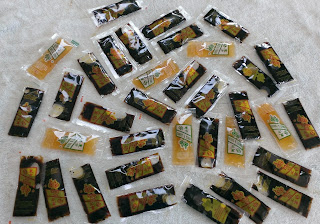 I don't really have a use for the sweet and sour sauce, except for eating it on crab rangoon (any ideas?), but I cook with soy sauce pretty regularly.  Today's stash went into a Tupperware container in the refrigerator door that holds a variety of condiments.  Next time I run out of soy sauce I'll just open all the little packets and dump them into the bottle.  That will probably be enough for several weeks.