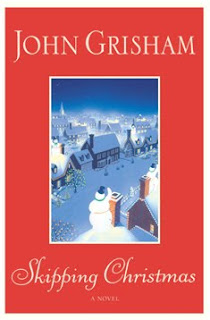 Since I never know exactly how long it will take me to get to work, I've started keeping a book in the car. That way, if I have free time I can it pull out and read a page or two. Appropriately, my latest book was a cute John Grisham novel, Skipping Christmas.


Imagine a year without Christmas. No crowded malls, no corny office parties, no fruitcakes, no unwanted presents. That’s just what Luther and Nora Krank have in mind when they decide that, just this once, they’ll skip the holiday altogether. Theirs will be the only house on Hemlock Street without a rooftop Frosty; they won’t be hosting their annual Christmas Eve bash; they aren’t even going to have a tree. They won’t need one, because come December 25 they’re setting sail on a Caribbean cruise. But, as this weary couple is about to discover, skipping Christmas brings enormous consequences–and isn’t half as easy as they’d imagined.

The story starts the Sunday after Thanksgiving. The Kranks are taking their daughter Blair to the airport, where she's leaving for a year-long Peace Corps assignment. Nora's sad that their family won't be celebrating Christmas together this year, but Luther, a tax accountant, sees Blair's absence as an opportunity. He calculates how much they spent on the holiday the year before (and how little they have to show for it), then talks Nora into taking a 10-day Caribbean Cruise that leaves on Christmas Day.

Much to their surprise, Luther and Nora find themselves the objects of scorn from their neighbors and groups they typically buy gifts from. They also find themselves under increasing pressure to conform. A surprise Christmas Eve phone call sets into motion a series of events that have them questioning the choices they've made.

Just like all the Grisham novels I've read, this one was entertaining, and like every good Christmas story, it had a happy ending. It was funny, but had a ring of truth to it. I think the book was also made into a movie, which I'll try to watch this before the Christmas season's over.
Posted by Kathy G at 8:15:00 AM