Life Is Nothing Without Friends

Yesterday I got Christmas presents from two longtime friends. I'm so lucky!

The first was from Debbie, who I met in second grade.(We won't talk about how long ago that was!) We attended the same elementary, junior high, and high schools, and participated in many other activities together. She was one of the attendants at my wedding, and she's Son Donald's godmother.

A couple of weeks ago Debbie sent me an email. A friend of hers was gathering children's DVDs to donate to Children's Hospital, and Debbie had offered to help her collect them. I stopped by the store the next day (and had a great time browsing through the children's video selection), but getting my purchase to Debbie turned out to be difficult.

However, she graciously volunteered to stop by work yesterday and pick it up. When she arrived, she was carrying a package for me wrapped in red and gold paper. I waited until I got home to open the box, which contained a cute Jim Shore Santa figurine. After dinner Tony helped me rearrange the decorations on the family room shelves so our Santas were grouped together (the new one is in the center) 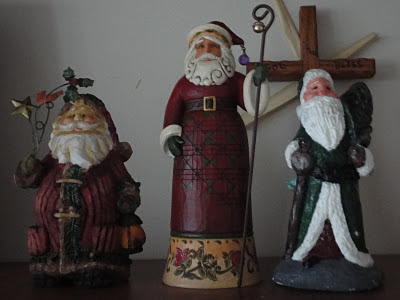 Later in the evening when Tony went out to put something in the mailbox, he discovered a box on the front porch. As soon as I saw the writing, I knew who it was from. Syd's been a friend since Junior High. We've spent innumerable hours together. She was my Maid of Honor when I got married. Even though she moved to Georgia after college, we've still kept in touch.

The box was wrapped in brown paper and sealed with packing tape, and her post office had run still another strip of tape around the package. Once I got through all the exterior wrapping, there was one more piece of tape holding the box closed. When I opened the box, the contents were protected by sheets of crumpled newspaper. However, when I finally got through everything, there was a treat waiting. In a holiday cookie carrier, Syd had arranged packages of cookie mix, several cookie cutters, and a beautiful angel ornament. She even included a card with a cat! 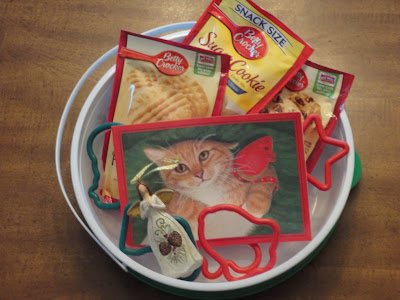 I wonder what treasures the next couple of weeks will hold?
Posted by Kathy G at 3:00:00 PM