I've Got A Map, And I'm Not Afraid To Use It 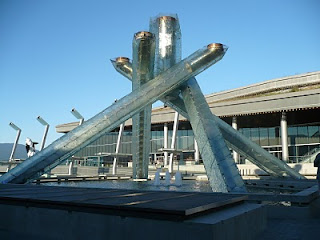 Before we left for our vacation, Tony and I had a tentative sightseeing plan, complete with suggested  activities and restaurants.  When we arrived at each city we checked into the hotel, got a map from the front desk, and jumped into our adventures. We followed our plans for the most part, but some of the best parts weren't on the original plan.

The first big change happened just 24 hours into our trip. We had tickets to take an Amtrak bus from Seattle to Vancouver because it left earlier and got us there before dark.  However, the bus was running almost two hours late, so we changed our tickets over to the train.  I'm so glad we did.  The train tracks ran next to the ocean on the west, and over the course of the four hour trip we got to see a beautiful sunset.

On our second day in Vancouver, we were going to visit Stanley Park, a huge green space in the northwest corner of the city.  However, after we bought our day's transit pass, we realized the bike rental stores around the park wouldn't be open yet, so we decided to take a 12 minute passenger ride across the Burrard Inlet on a sea taxi to North Vancouver.  A chance conversation with a fellow passenger completely changed our plans for the day.  After exploring the waterfront market (and picking up some picnic food for lunch), we took a city bus to Lynn Valley Park where we walked across a suspension bridge over Lynn Creek and hiked some of the park's trails. We stopped and ate our lunch on a large boulder next to the creek. 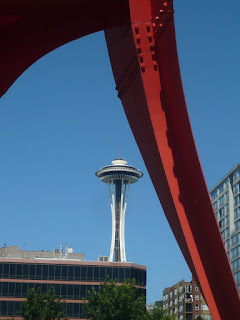 We made it to Stanley Park on Tuesday. The next day we'd planned on visiting Victoria, the capital city of British Columbia, but were too optimistic with our time, so we bagged that part of the trip and spent the last day in Vancouver revisiting our favorite parts and buying a few souvenirs. We arranged to take an earlier bus back to Seattle on Thursday, which allowed us to fit in a few more things there.

After breakfast on Friday we checked out of the hotel, and headed to the transit station for the trip to the airport, wheeled suitcases dragging behind us.  Fortunately, our flight went according to plan; we even arrived back in St. Louis ten minutes early!
Posted by Kathy G at 7:47:00 AM