The Third Time's The Charm

Every year Tony and the boys do a great job of putting Christmas lights on the front of the house. The lights are on a timer so they go on at dark, stay illuminated for several hours, and go off by themselves. Unfortunately, I don't see them much. They're not lit when I leave the house in the morning, and it's still bright when I get home from work. Unless I happen to walk out to the mailbox or run an errand after dark, I can go many lightless days.

However, this is what I see from the kitchen: 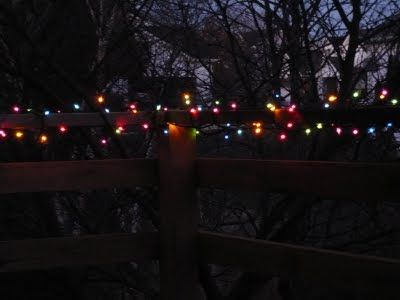 Several years ago my neighbor decorated her deck. I liked the idea so much I stole it. My kitchen has a bay window that overlooks the deck, so I get to admire these lights every night. It almost didn't happen this year.

We put up the lights the weekend after Thanksgiving. The strand I've used the last few years for the deck decided to kick the bucket, so I went to the drug store to buy a new one. Instead of one 200-light set of colored mini lights, I had to buy 2 100-light models. I came home and after a bit of work had them wrapped around the top deck rail, then plugged them into their timer.

The lights were beautiful. For about a week and a half. Right after I recycled the box and tossed the store receipt, one of the two strands stopped working. I tried tightening each of the bulbs on the offending set, but nothing worked. I added "redo the lights on the deck" to my massive holiday list.

Last weekend we put up the Christmas tree. One of the sets of lights didn't work, so Tony headed out to buy more. He was back very quickly, and told me that our local drug store was out of lights! I've never had that happen. I offered the working ones from the deck; he accepted them, and I set out for the closest big-box hardware store to get something to go on the deck.

The hardware store's Christmas section was hopping. They had ornaments, decorations, artificial trees, and stands for real trees. I got to the lights section. It was pretty much bare, except for several boxes of blue rope lights and one set of white LEDs. Neither was what I was looking for, but I didn't want to drive all over town, so I decided to take a closer look at the white ones. When we replaced some bad strands in the front yard, I said I'd invest in LED strands as I could.

The bulbs must have been returned to the store. They were wound loosely on a spindle, and held on with plastic wrap and clear packing tape. However, it was the only one so I checked the price...five times as much as I'm used to paying for my Christmas lights! I stood in the aisle for several minutes trying to decide if I should go to another store or purchase what I had in my hand.

I decided to go for it, and brought the package home. I plugged the unwound set into the outlet on the deck. Tony (and Donald who was here assisting us with the tree) liked them, so I unplugged them and wound them around the deck rail. I plugged them in and stepped back to see...half of the stupid lights not working! A chunk of the bulbs in the middle of the strand were dark. I wasn't thinking happy thoughts as I took them down. The whole mass got shoved into a grocery bag to take back to the store, and I left the deck dark for the night.

Monday I visited the Customer Service counter of the hardware store to get my money back, then went to another store to see what they had. I was getting pretty discouraged. Once again, the Christmas department of the store was brimming with items, but the lights section was sparse. However, among a stash of boxes of 350-bulb white lights, I spied a box of 350 colored mini lights on the top shelf. Even though it was almost twice as many as I usually use, I grabbed the box and held on tight. No one was going to take it from me!

I didn't have time to install the lights before dark last night, but when I got home from work today I made it my first task. The weather was much less pleasant than it was the other times I did the job; today I had to stop in the middle to come in and warm my hands up. However, the results are worth it. As I was cooking dinner tonight, I was able to look out the window and admire the cheery Christmas glow.
Posted by Kathy G at 8:01:00 PM