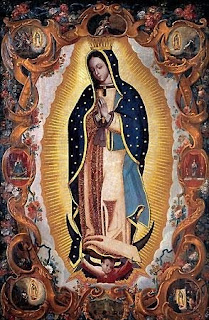 Our parish church has been designated as one of the "hubs" for the area's Catholic Hispanics. There is a Spanish Mass on Sunday evenings, and one of the priests works with both the English and Spanish communities. The past few years the feast has been celebrated on the Sunday closest to the actual day, but since it fell on the weekend this year they went all out.

The day started with an overnight prayer vigil and a solemn procession in the afternoon. When we arrived for Mass, I heard drumbeats before we entered the building. As we picked out a place to sit, I saw a group of teenagers dressed in Indian costumes dancing to the rhythm of the drum in front of the altar. They were shaking maracas, and their costumes were covered with beads that rattled when they moved. They danced for about five more minutes, then left to assemble in the back of church. When the entrance procession started, they led the way.

After the first reading, there was going to be a reading and reenactment of the Guadalupe story. However, the group wasn't ready, so they ended up doing it after the Gospel reading. The story of Our Lady of Guadalupe, according to my program:


As a widower, Juan Diego was prone to long periods of silence. He walked every Saturday and Sunday to church, and on cold mornings, like other members of his Indian tribe, wore a woven cloth called a tilma, or ayate made with coarse fibers from the maguey cactus for cotton was only used by the upper class Aztec.

On Saturday morning, December 9, 1531, he reported the following: As he was walking to church, he heard the sound of birds singing on Tepeyac hill and someone calling his name. He ran up the hill, and saw a Lady, dressed like an Aztec princess. The Lady spoke to him in Nahuatl, his native tongue. She called him “Xocoyte,” her little son. He responded by calling her "Xocoyata", his littlest daughter. The Lady asked Juan Diego to tell the bishop of Mexico, a Franciscan named Juan de Zumárraga, that she wanted a "teocalli", a sacred little house (church) , to be build on the spot where she stood, in her honor, where:

“I will demonstrate, I will exhibit, I will give all my love, my compassion, my help
and my protection to the people. I am your merciful mother, the merciful mother of all of you who live united in this land, and of all mankind, of all those who love me, of those who cry to me, of those who seek me, of those who have confidence in me. Here I will hear their weeping, their sorrow and will remedy and alleviate all their multiple sufferings,necessities and misfortunes.”

Recognizing the Lady as the Virgin Mary, Juan Diego went to the bishop as instructed, but the Spanish bishop, Fray Juan de Zumárraga was doubtful and told Juan Diego he needed a sign. The Lady promised Juan Diego she would give him a sign the following day. According to Juan Diego, he returned home that night to his uncle Juan Bernardino’s house, and discovered him seriously ill. The next morning December 12, Juan Diego decided not to meet with the Lady, but to find a priest who could administer the last rites to his dying uncle. When he tried to skirt around Tepeyac hill, the Lady stopped him, assured him his uncle would not die, and asked him to climb the hill and gather flowers. It was December, when normally nothing blooms in the cold. There he found roses from the region of Castille in Spain, former home of bishop Zumárraga. The Lady placed the roses carefully inside the folded tilma that Juan Diego wore and told him not to open it before anyone but the bishop. When Juan Diego unfolded his tilma before the Bishop roses cascaded from his tilma, and icon of Our Lady of Guadalupe was miraculously impressed on the cloth, bringing the bishop to his knees.

The bishop acknowledged the miracle and within two weeks ordered a shrine to be built where the Virgin Mary had appeared. He entrusted the tilma with the image to Juan Diego, and permitted him to live in a small hermitage near the shrine, and the spot where the Virgin Mary had appeared. Juan Diego told the story to all the pilgrims who came to pray there, propagating the account of the apparitions in Mexico.

Because it was a bi-lingual celebration, the priest and deacon moved back and forth between Spanish and English. All of the music was in Spanish; I recognized some of the songs, although I couldn't really sing along. During a couple of the prayers, we were instructed to recite in either language. It was really confusing!

After Mass everyone was invited to the school cafeteria for a meal. When we got there the line wasn't too long, but it quickly stretched out the door! There were taco chips and salsa on each table. We went through the cafeteria line to get our food. Each plate contained a tamale, a large spoonful of pork in green chili sauce, beans, and rice, and I picked up a bowl of excellent soup that contained meat, vegetables, and hominy. There were several tables covered with desserts, and the drink station was set up in the corner.

The atmosphere was chaotic, but in a good way. A DJ set up his equipment in the corner of the cafeteria and started playing. The entire cafeteria filled up, and the extra people were directed to tables in a couple of the school classrooms. There were children running around and playing with their friends, and adults talking animatedly.

After we finished our dinners, we sat for a few minutes, then decided to leave so someone else could have our seats. We said goodbye to our table mates, threw our trash away, and left. I was glad we decided to attend.
Posted by Kathy G at 11:20:00 AM