Son Donald was at the house doing laundry today. He was pulling the last load out of the washer when I heard a mournful cry from the laundry room. Turns out he forgot to remove his MP3 player from the pocket before his work pants went into the washer. The player went through the complete cycle-wash, rinse, and spin. Although the exterior was now clean and shiny, the screen was completely fogged up; a sure sign of interior water.

Before Donald went out to buy a new player, he thought he'd try to let this one dry and see if it still worked. Between our brainstorming and a Google search, we came up with these ideas for drying out the unit: 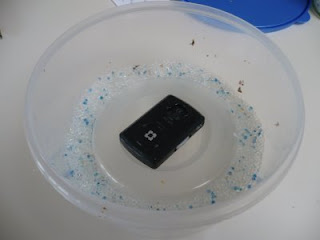 The last idea made a light bulb go on in my head! I had a jar of silica gel left over from a project last year, so we decided to see if that would work. Because I didn't think it would be a good idea if the desiccant touched the player, we used a small deli container placed upside down inside a bowl (like a shelf) and added a layer of silica beads. The player went on the shelf, then the lid was put on the bowl.

All the Websites said it's going to take at least 24 hours (maybe 48) to see if the experiment works. Donald promised to report back when he knew if his player would make it or not, but at a minimum he'll have to go through several agonizing days at work without his tunes!
Posted by Kathy G at 4:05:00 PM