Our first night in Rome Hubby Tony and I slept for almost 12 hours.  However, since we had crashed so early the night before it was only 8:00 when we rolled out of bed. We dressed quickly, then went downstairs and helped ourselves to an excellent buffet breakfast in the hotel's dining room. After we were filled up and caffeinated, we gathered our things and headed out on another adventure.

We knew a car would pick us up at noon to take us to the cruise ship pier, so we only had a short time to take in as much more of the city as we could. For a little more than two hours we walked up and down streets, getting a little lost and then finding our way again. We stopped at the Spanish Steps, and admired the “Fountain of the Old Boat” at the bottom.  Next we walked down the Via Condotti, gawking at the displays in the high-end designer store windows.

When nature called we were too far away from the hotel to go back, so we followed the signs to a familiar place that we knew would have a bathroom available:

All too soon it was time to head back to the hotel to check out and wait for our ride.  The driver showed up right on time and loaded our luggage in the car for the 90 minute ride to the Civitavecchia port.  As we were leaving the city, he took a less-direct way that took us by the Colosseum and the Roman Forum.  Seeing those ancient monuments made me realize I needed to come back to Rome some day.

The cruise check in was uneventful, and before we knew it we were settled in our cabin and ready for what the week would bring. 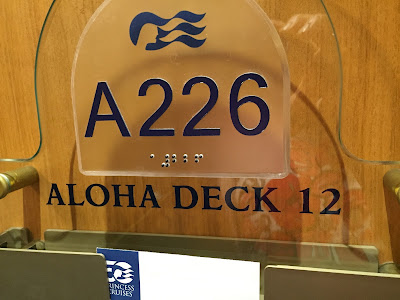