This is the view from my kitchen window: 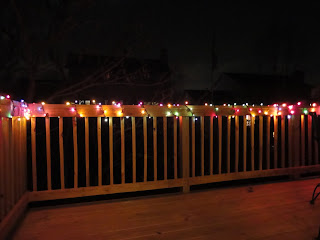 My tradition of putting Christmas lights on the deck goes back quite a few years.  While Hubby Tony is busy doing the front of the house, I take care of the back.  The colorful bulbs provide a bit of holiday cheer every night when I'm fixing dinner.

Over the years I've come up with a good system for putting up these lights.  I start at the farthest point from the deck door and wind them around the top rail until I reach the stairs at the other end.  Next, I attach an outdoor extension cord to the end of the lights, pass it under the deck and bring it up by the door, then nestle the cord in a gap in between two deck floor boards until it reached the outlet six feet away.

This year the weather was nice the weekend before Thanksgiving, so I got out the tub of lights and strung them up.  Took me fifteen minutes.  After I got done I realized I had a problem.  We had the deck replaced this summer and the large gap between the floorboards for the extension cord wasn't there any more.  Without that gap it was dangerous; someone could trip over the cord and get hurt.

I went away to ponder alternatives. While I was thinking Hubby Tony came to me with a suggestion.  What would happen if I took the lights down and put them up the opposite way (starting closest to the door and ending at the far end).  Then I could lay the cord on the deck right next to the house.  No one walks there so it wouldn't be in the way.

I decided to try his suggestion.  It took ten minutes to get the lights off, and another twenty to string them back up.  I ran the cord across the deck, then plugged the lights into the timer and the timer into the outlet.  The lights were ready for their big reveal on Thanksgiving.  That night (and every night since then) they've turned themselves on at dusk and off six hours later.

It's little things like this that make me happy.
Posted by Kathy G at 8:41:00 PM